Oh God, the world is about to die*

This title was inspired by an Egyptian man’s (Mans Leon) quotation which is, “Oh God, Egypt is about to die”.

The world is about to die because lately it has become crazy.
Days ago we would see how in Port Said (Egypt) Egyptians killed themselves after a football match between the local team, “Al Masry”, and “Al Ahly” . More than seventy Egyptians died and hundreds were injured. The security forces didn’t anything to help people. No one knows why it happened? Do you..?

After a long period of calm down -after the Mubarak´s falling- all the world thought the peace, definitely, will install in Egypt. A lot of people thought that Egypt would never be disturb. But, Egypt has become violent since the last Wednesday. However, some indications point to a hidden hand or as Egyptian government said “a third side”. Someone wants destabilize this country. Someone wants psych out the Middle East. Egypt is not the only one who is suffering this situation.

After disturb of this day, clashes came back to the Egyptian street in Alexandria, Cairo and Suez. The security forces are using tear gas against the demonstrators and confusion gains power in this country.

For its part, the Military Junta gives the fault to foreign and domestics parts, whereas that Egyptians want and reclaim liberty and peace, and to be governed by themselves without foreign interferences. Only God know what will happen to this country.

4 comentarios en “Oh God, the world is about to die*” 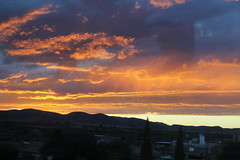